management
+380
When placing an order please inform the manager that you've learned the information on Allbiz! Thank you that you buy on Allbiz!

The Cristoph liebers firm on production of high-quality details for the knitting equipment is undisputed leader.

We offers more than 7500 different types of details for any chulochno-nosochny and kruglovyazalny equipment including domestic.

It is a little theory from BSE:

Main working bodies Knitted car: loop-forming (knitting) mechanism, food mechanism (giving of threads) and ottyazhny mechanism (tovarootvod). The loop-forming mechanism has needle cases with needles, platinum, press (for barbed needles), nitevoditel, etc. elements. Platinum (the plate having irregular shape) bend threads in loops and move them along stabbing blade (if needles are not mobile) or hold (if needles are mobile); take place by cars usually on one in intervals between needles. The press represents prism, plate or disk which, pressing hook, interfere with hit of loop under it. The food mechanism during making of thread on needles provides certain and constant tension it by means of thread guides, brakes, niteottyagivatel, etc. devices. There are food mechanisms in which it is dosed thread length for each loopy row (is measured). Food by yarn can be carried out by giving of separate threads (the car of cross knitting) and groups of threads (warp-knitting machines). Ottyazhna the mechanism serves for branch from needle cases of ready jersey with constant tension. Can be cargo (the tension is created under the influence of the weight of tovarootvodyashchy system or load) or ottyazhny (procrastination is carried out by means of rollers).

Processes of knitting on the Knitted car are automated by means of the mechanisms controlling food continuity, constancy of tension of threads, operability of needles, availability of defects (dropped stitches), etc. When knitting piece products use the mechanisms which are carrying out loop transferring at change of width of cloth, forming the dividing loopy ranks entering splicing yarn, changing knitting density, knitting irregular volume shapes in products (stockings, gloves), etc. Electronic control units by work the Knitted machine, selection mechanisms (introduction to work) of needles are developed when knitting risunchaty and openwork interlacings. For knitting of fur fabric the Knitted machine, tiny combing devices having in each loop-forming system use round. By means of these devices in loops bunches of the long fibers forming pile are got involved. Productivity the Knitted car (one million loops in 1 min.): osnovovyazalny - to 3,74; kruglotrikotazhny - to 5,94; kruglochulochny automatic machines - to 1,44. The Knitted car, made in Germany, the USA, Great Britain, ChSSR (fig. 2), GDR (fig. 3) were widely adopted. Further development the Knitted car is directed to increase of class of cars, increase in number of loop-forming systems and automation of process of knitting.

In addition to industrial the Knitted car, also household manual knitters and devices are issued. Main nodes of hand-driven machines: loop-forming elements (latch needles and platinum), carriage, counter of ranks. The carriage manages work of needles and platinum at the time of knitting; moves manually on the directing rails. Knitting devices have the delaying hooks, comb with probes on which manually hang loops, and rulers by means of which hooks move and knitting density is regulated.

Needles for circular needle webber of "Samsung
In stock
1 UAH

Needles for knitters of "Samsung
In stock
1 UAH

Needles for Rachel machines of "Samsung
In stock
1 UAH 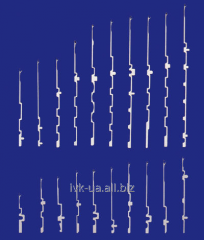 Platinum for knitted CRISTOPH LIBERS cars in other languages